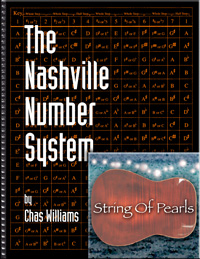 THE NASHVILLE NUMBER SYSTEM is a method of transcribing music so that a song can be understood and performed. Nashville chord charts substitute numbers for the chord letter symbols found in traditional music notation. Rhythmic and dynamic notations, as well as chord voicing symbols from formal music are used in conjunction with symbols developed uniquely by Nashville musicians.

Since the middle ages, musicians have substituted Roman numerals for chord letters. However, around 1957, Neal Matthews, a member of the Jordanaires, originated the idea of substituting regular numbers for notes. Neal said he was familiar with the system of shape notes used by gospel quartets in the 30’s and 40’s, which used a different shape for each note of the major scale. Working several recording sessions a day forced Neal to devise a method of writing vocal parts so that the Jordanaires wouldn’t have to commit tremendous amounts of material to memory. He began writing vocal charts substituting numbers for the shape notes and developed his own system of writing music with numbers.

In the early 60’s Charlie McCoy noticed the unique approach that Neal and the Jordanaires used to map out a song on paper. So, Charlie applied Neal’s number system to chords and the rhythm section. Charlie was doing a lot of sessions with Wayne Moss, David Briggs, Harold Bradley, Bob Moore, Pete Wade, Ray Edenton and Grady Martin. The idea of substituting numbers for chord letters quickly spread among the other session players in Nashville. Musicians used the number system to chart out an entire song on one piece of paper while hearing a demo of the tune for the first time. This innovative number system has become the standard method of music notation in Nashville.

From a conversation with Harold Bradley, he said,” The A team was memorizing all the stuff. One day we had a substitute; we had Wayne Moss. I looked over and Wayne had a little bitty small pad and he was writing, and Charlie McCoy was over there working with him. I went over and said, ‘What are you guys doing?’ They said,’Well, we’re writing this down.’ Charlie had studied at the University Of Miami and that’s what they were doing was writing down the number system. I walked away thinking,’well what’s this?’ because we were used to memorizing it. But I found out when I became leader that it saved you 15 minutes a session if you could do the charts before the session. Back then, sometimes they didn’t write the same chords to each verse.”

Harold said,”Once, Vicki Carr came and looked over my shoulder and said, ’You guys aren’t in the music business, you’re in the numbers business.”

“That was the only way we’d work with the Monkee’s because the guy hadn’t written the song. He came out after about an hour or so of us sitting around. He strummed the guitar and we wrote down the chords, and then later on he wrote the words. It was not the way we usually made music,” Harold said.

One of the main benefits of a number chart is that it can be played in any key without transposing or rewriting the chart into a different key. A chart’s numbers maintain their same relationship with a song’s chord changes regardless of the key.

For example, if Dolly Parton sings I Saw the Light in the key of C, Johnny Cash might have sung the same song lower, in the key of G. If they use identical arrangements, the same Nashville number chart of I Saw the Light would work for both Dolly’s and Johnny’s performance. As well, dictation of a song from a recording or radio is easy because you don’t need to know the song’s key to write down the correct chord changes and melodies. This is especially nice for those of us not blessed with perfect pitch.

Over the years, country music has expanded to include more complex rhythm patterns and chord structures. Phrasing and rhythms from pop, rock, jazz, blues, cajun, and reggae have been incorporated into the music of country artists. As a result, musicians have combined traditional notation symbols with Nashville chord charts so complex music can be transcribed and played precisely. There are symbols and notations unique to the Nashville Number System not found anywhere else. For example, the Diamond means to strike and hold a chord for the designated amount of time.

Don’t be scared. The Number System is easy. You don’t have to know how to read music to learn how to write a number chart. If you flip through this book, you will see some really detailed chord charts. But, there are also some really simple bare bones charts. Apply this book to what you need. If you are a songwriter and just need to show how to follow the chords to your song, then all you need is to be able to figure out what the “1” chord is and then find the numbers for the rest of the song. After that, learn how to count the proper amount of beats for each measure and where to place each bar on the page. Once you’ve learned how to do all that, you’ll be ready to have some musicians play your song. The players can add their own arrangement notation.

If you want to get farther into Nashville musicianship, this book will teach you some fundamental music theory and how to notate more complex rhythms. You can learn to write your chart with any degree of detail you need; a basic road map number chart, open to interpretation, or a chart with a highly detailed arrangement notation that includes the licks you have written for the song.

Also, I describe the Nashville Number System spoken language. Whenever there are quotations in the book, that is how the chord or phrase would be spoken if someone was telling how the song goes. You will be able to discuss number charts and talk chord progressions with other musicians. If somebody yells, “Fifteen Eleven”across a stage, you’ll know it’s the chords for 4  bars of the song and not a football score. “Fifteen Eleven”, said so simply, contains enough information to get you through the entire intro to a song you’ve never heard. In addition, this book teaches terms used to describe feel and style for different types of music. It’s important to know musician terminology. Otherwise it can be really frustrating trying to describe what you’re hearing in your head.